With ‘Molly of Denali,’ PBS Raises Its Bar for Inclusion

Dozens of Alaska Native writers and advisers were recruited to help create the children’s series, one of the first to have a Native American lead.

VANCOUVER / July 15, 2019 – When two children’s television producers from the East Coast set out to make a show about an Alaska Native girl whose parents run a rural trading post, there was no question that they would need some cultural guidance.

Dorothea Gillim, who was executive producer of the “Curious George” television series, grew up in Rochester, N.Y., where the grocery chain Wegmans originated, and she had long imagined a children’s show that centered on a store that was the hub of the community. The show’s other creator, Kathy Waugh, who was a writer on “Arthur,” envisioned a story about an adventurous young girl living in a remote area.

The setting for the show came to Gillim in 2015, when the news media was covering President Obama’s trip to Alaska. On the eve of the visit he announced that the name of Mount McKinley, the highest mountain in North America, would be restored to Denali, its Alaska Native name.

The show that the producers dreamed up, called “Molly of Denali,”ended up becoming a PBS cartoon about a 10-year-old Athabascan girl with a video blog about life in rural Alaska. PBS says it is the first nationally distributed children’s series with a Native American lead.

The show, which premieres across the country on Monday, was written for children ages 4 to 8. It follows the spunky and inventive Molly Mabray and her friends as they solve kid-friendly problems, like earning enough money to buy an inflatable tube to ride on the water or finding ways to keep four-legged creatures out of their garden.

It also represents what is perhaps PBS’s most ambitious effort yet to educate its young viewers about a distinct cultural group, while investing in making sure that members of that group are involved at every level of production.

The core narrative of the show involves Molly making new connections to her Native identity. But neither of the creators had Native roots, and they knew they would need to educate themselves about the cultural heritage of their main character. PBS and the Corporation for Public Broadcasting, the nonprofit that distributes federal funds to public broadcasting stations and programs, including “Molly of Denali,” urged the producers to find a way to intimately involve Alaska Native people in the making of the show.

In the past, one or two cultural advisers might have been considered sufficient for informing a children’s show about an Alaska Native family. But for a television show created in 2019, after years of reckoning with inadequate representation in television and film, there’s an understanding in the industry that Alaska Native people should be integral to the process of telling a story about themselves.

“For so long people have come in and literally just taken our stories and have done what they wanted with them,” said Princess Daazhraii Johnson, a creative producer and writer on “Molly,” who is Neets’aii Gwich’in. (The character Molly’s cultural heritage is from three Athabascan groups: Gwich’in, Koyukon and Dena’ina.)

To make sure they got the show right, the Boston public broadcaster WGBH, which produced the show, involved more than 60 people who are Alaska Native, First Nations or Indigenous in writing the scripts, advising on cultural and linguistic issues, recording the theme song and voicing the characters. “We recognized our own ignorance of the subject and we didn’t want to repeat stereotypes,” Gillim said.

The production had cultural advisers from each region of Alaska that the show addresses, and for each animated Native character, they hired a voice actor who was of either Alaska Native or First Nations heritage. It’s a scope of inclusion rarely seen in children’s television, one the show’s Native writers and advisers hope becomes a new standard for how TV producers handle specific cultural identities.

Growing up in the 1980s, Johnson, the “Molly” writer, said she remembers few Native role models in the media and troubling racist portrayals of Native Americans in television and film. Even now, stories in mainstream pop culture about Native American communities tend to rely on tropes about “savage” or “noble” warriors and focus on the anguish of poverty and alcoholism, instead of showing Native Americans in everyday roles, according to a report released last year by the First Nations Development Institute, a nonprofit focused on improving the economic conditions of Native Americans.

Instead of outsiders continuing to co-opt and misrepresent Native culture, “we have to be a part of informing  what that image is, and we have to be at every level of production,” Johnson said.

Not all shows have the funding to reach that goal, said Linda Simensky, the vice president of children’s programming at PBS. “Molly” could because the show received support from the U.S. Department of Education and the Corporation for Public Broadcasting, she added.

The show qualified for Education Department funding because it revolves around informational text literacy, which means teaching children how to use tools like guidebooks, maps and internet search engines to solve problems. In the show, for example, Molly uses a map of the land surrounding her village to find and fix a wildlife camera that was livestreaming an eagle’s nest while babies hatched. 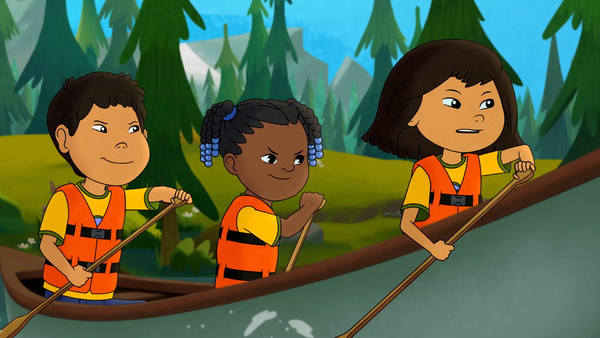 In one episode of “Molly of Denali,” Molly and her two friends prepare for a canoeing competition. CreditPBS Kids

Funding from the Corporation for Public Broadcasting allowed WGBH to train six Alaska Native screenwriters and hire four Alaska Native advisers. The producers met the advisers in Fairbanks, Alaska, in 2016, to develop the world of the show before production began.

“It became very clear to me that I’m sitting with people who don’t know anything about my culture, about where I came from,” said Luke Titus, one of the advisers.

Titus, 78, an Alaska Native elder who is Lower Tanana Athabascan, discussed growing up in a small cabin in an Alaskan village and the centrality of nature in his community. He eventually got used to the idea that it was O.K. to interrupt the producers to share his own insight, a behavior that isn’t part of his culture’s custom, he said.

He shared painful stories, too, including one about being sent away to boarding school when he was about 12 years old, part of a broader forced assimilation campaign by the United States government. Boarding school is a common childhood memory for Native Americans of a certain generation: Sovereign Bill, the 14-year-old girl who voices Molly and is Muckleshoot and Tlingit, said that her grandmother was sent to boarding school in Alaska as well.

Titus’s story inspired an episode of “Molly of Denali.” In one segment, Molly sets out to find her grandfather’s lost drum, which he gave away when he was a child at boarding school. Using an old photograph of her grandfather, Molly tracks down an Alaska Native woman who had befriended him at school, who explained that he gave up the drum because singing Native songs wasn’t allowed there.

“They only wanted us to sing new songs,” the woman says, “Their songs. In English. We were made to feel bad about who we were.”

It’s a sensitive topic to introduce to 4-year-olds, but the writers and producers on the show said that they felt the appropriate way to do it was through the eyes of a curious child who wanted to help her grandfather.

At other moments during the meetings about the show, Alaska Native advisers pointed out parts in the script that clashed with their culture. Gillim recalled that in an early draft, a script had Molly tossing a map at her mother in excitement. But the advisers told her that behavior didn’t align with Alaska Native custom, which emphasized that children must show respect to their elders. In a revised script, Gillim said, Molly gently places the map in front of her mother.

“We came up there with all of our East Coast producer energy and with, certainly, the willingness to learn,” Gillim said. “But we really learned the importance of slowing down and listening.”

One of the advisers gave Molly her Native name: Shahnyaa, which means “one who informs us.” The concept of Alaska Native names became the basis for a segment in which Molly interviews the adults in her town about how they received their Native names.

At the heart of the show are Molly’s efforts to learn about her family’s Alaska Native heritage and sustain it as a member of a younger generation. In another episode, Molly rows a traditional canoe, called a beedoye. As she pulls the oar back, she sees a mirage of an ancestor rowing along beside her.

“I could just feel my heart bursting,” Rochelle Adams, an adviser, said of the canoeing scene. Adams, 39, is an Alaska Native linguist and an artist, and is Gwich’in Athabascan.

While embracing tradition, the Alaska Native advisers wanted to make sure that the show didn’t adhere to the stereotype of presenting Native life as antiquated, relegating it to the past.

Many of the stories are framed around Molly’s video blog, and she often uses an internet search engine to launch one of her adventures. Her mother is a pilot, and her grandfather is a volcanologist, who, in the first episode, is trying to capture an eruption on camera.

“She’s modern. She’s not something of the past, something in a museum,” Adams said. “She is feisty and educated and holds her culture strongly.”